A quick and easy method of making felt in a washing machine – just parcel up and throw in with your usual wash.

Felt is created by agitating wool fibres until they mat together to form a non-woven fabric. The fibres can be laid flat on a surface or moulded around a former such as a hatshaper, cardboard or even a ball.

On a bad day use the felt making process to relieve the tensions, it usually makes a very good felt. Making the felt is simple, it requires only a little time and effort to achieve a pleasing result. However if time is of the essence, here’s a faster but less controlled method: 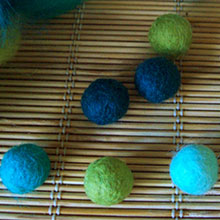 The ‘lazy’ way to make balls, but with less control over the final surface decoration (see how to felt balls by hand) is to make them in a washing machine.

Alternatively, Andrea Bruek emailed us with her method: 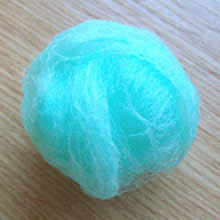 dry or slightly wet ball, two or three times bigger than you want your final size to be, place it in the corner of a plastic bag, tie it with string to keep it from moving too much, place your next ball inside and again tie then string to secure the second one in place, ensuring that each ball is encased in plastic and not able to touch another ball’s surface. Depending on the size of the bag, you can make many balls in this fashion and then prick the plastic many times to allow water to get inside. Place the bag or bags into the washing machine at 60°C on a full cycle. When finished, the balls are round, firm and excellent for making other articles like necklaces. If you create the balls in layers, you can cut them in half with sharp scissors and see the lovely patterns inside. This process is also great with the children as it is a surprise to find the balls and see how they turned out’ 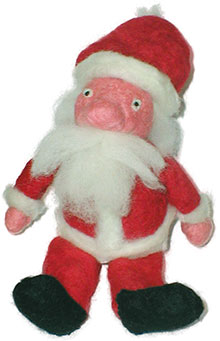 This Santa was felted almost entirely in a washing machine. The head, body, hands and nose were created from balls while the limbs were made by roughly shaping the Merino wool fibres before rolling them and tack stitching them into J-cloth. The ‘body parts’ were then stuffed into tights and then into a mesh wash bag along with the balls. After two 40°C cycles, the pieces had felted well enough to be sewn together. To make Santa’s fur trim, the fine white wool was lightly felted before being cut into strips and needle felted into place. His beard and moustache were made from unfelted fibres which were also added with the help of a felting needle.

It will be easier to decide how much wool fibre is needed for projects as you do more and more feltmaking. The overall amount will be determined by the thickness of the felt and density to which it is felted. As a rough guide, we suggest 100g will make a 30cm square. Trial, error and note taking are recommended!

Browse the website for feltmaking wools and products here