Take your weaving further with a Myrehed Draw Loom 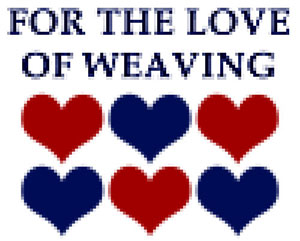 A draw loom gives the weaver dramatically extended fabric design options using a traditional Countermarch floor loom. The draw loom controls individual warp threads to build up patterns on a ground weave. Think of adding pixelated images or lettering in your choice of script to your woven fabric.

That is the joy of the draw loom! Now read on for all the essential details to more creative weaving.

The draw loom is added to a traditional countermarch floor loom. The draw loom structure and the tools which make up its working parts are described here to help you identify and better understand the terms used on this page. 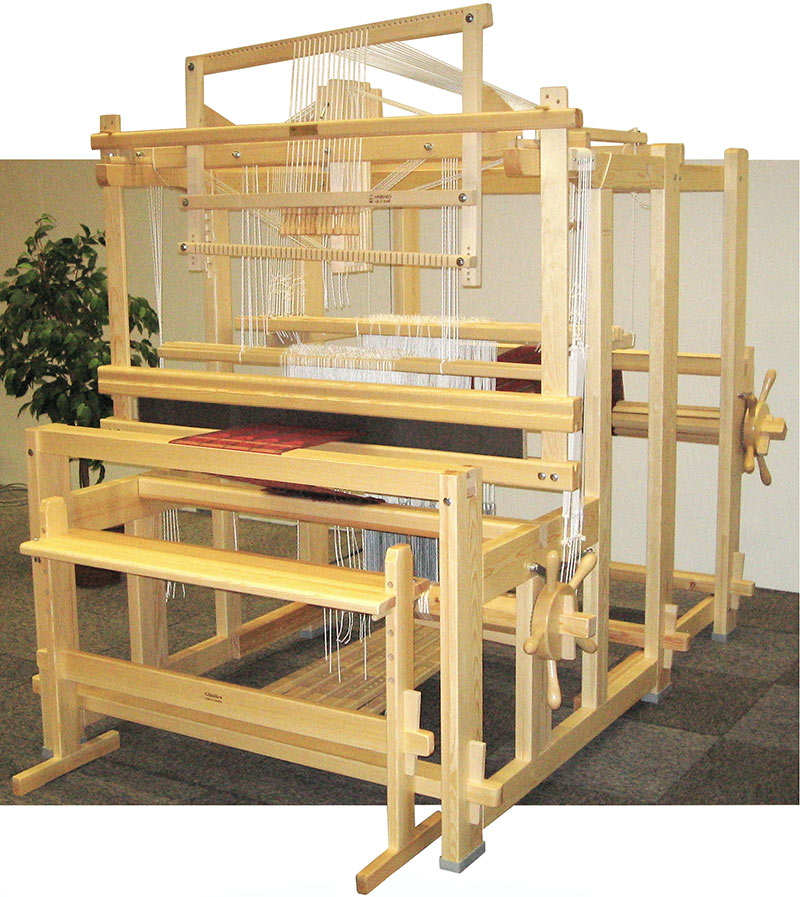 Draw looms can’t produce every unit weave (typically a warp rep or a weft rep, for example). The key element of the resulting design is the difference between the draw loom created pattern and the woven background. The design simply requires more warp threads to show in either the pattern or the background and as a result more weft threads will then show in the other.

A draw loom unit is an additional harness placed within a Countermarch floor loom, it adds the ability to weave complex patterns into the fabric which may not have a repeating pattern; a name on a place mat, flowers on a wall hanging or images which can be designed as for a tapestry.

The draw loom uses two distinct harnesses, the loom’s original weaving harness and the added Draw loom harness. The draw loom harness lies within an added bridge within a Countermarch floor loom. The second harness of draw loom pattern shafts are attached to the bridge which is placed inside the loom and behind the first harness. A separate loom extension is added to the back of the loom to increase the working depth of the loom. Adding the extension provides additional working space for the shafts and the increased warp length helps to reduce the warp tension on opening the shed.

Designs are made by pulling drawcords which raise individual units of heddles. The cords are held in place by wooden dowel pulls, located just above the beater. The single unit draw loom is comfortable to use, with drawcords at eye level. You can see photos of the older styles of draw looms in Lillemor and Johanssons book, Damask and Opphamta (now only available second hand and very expensive).

Where is the Draw Loom made?

The Myrehed draw looms are made by the Myrehed family in Varmland Sweden.

What kind of loom do I need to add a Draw Loom?

The draw looms supplied through George Weil in the UK can be fitted to most Swedish countermarch floor looms and in particular the Glimakra Standard Countermarch looms. If you have another make of floor loom, we can determine if you can add a draw loom.

What Countermarch Loom options are available?

The single unit draw loom can in most cases, be used with either style of countermarch loom.

What size floor loom is required to make a Draw Loom?

The draw loom is designed for many weaving widths of the most common Swedish looms.

The Myrehed Draw loom available from George Weil has been designed to best fit the Glimakra Standard Countermarch floor looms. A version is available for the Glimakra Julian loom. The smallest weaving width is 100cm. The other sizes are 120cm, 150cm and the largest is 160cm. The price list shows these four sizes only. If your loom has a discontinued weaving width not shown in the price list, please contact us to explore the options for a draw loom to fit your loom.

How many shafts does a loom need for a Draw Loom to be added?

A draw loom can be added to a floor loom with only four shafts, but to weave satin, you will need 5 shafts. The 6-shaft satin is also very commonly used for damask weaving using finer threads. It is helpful to have 6 to 8 treadles.

What is a Loom Extension and do I need one?

The Glimakra Standard loom is 140cm deep. A draw loom with the first harness of 10 pattern shafts needs the loom to be extended by a minimum of 60cm to accommodate the second harness of draw loom shafts. Long eyed heddles which are used in the first harness also reduce the shed produced. The extension increases the warp length which improves the final shed depth.

The Myrehed draw loom extension is adjustable from a minimum additional depth of 20cm to over 100cm. It is easily adjustable and at it shortest the frame of the extension fits inside the original loom frame.

The maximum height of a draw loom is 195cm.

How to set up the Loom Extension 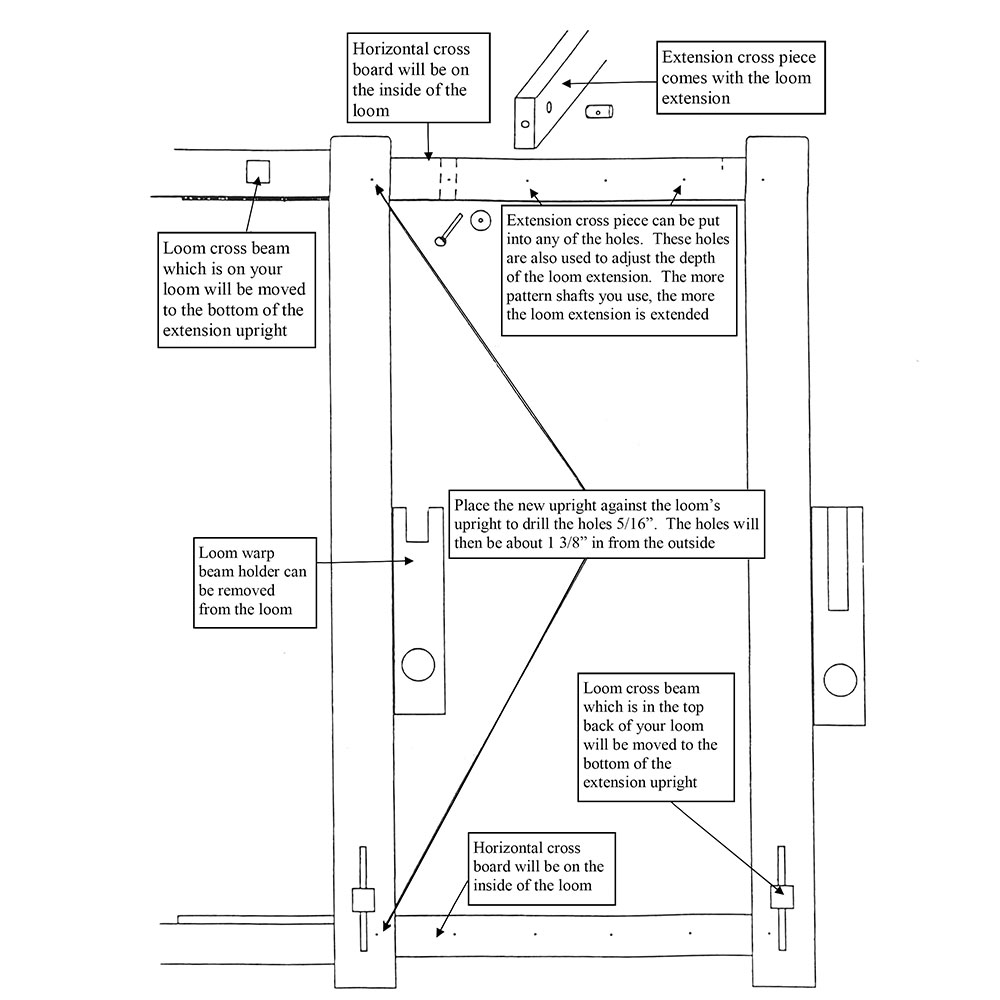 If I set up a Draw Loom, can I use this loom for weaving other things?

The loom can readily be returned to normal use after using it as a draw loom. The draw loom bridge is easy to remove or can stay on the loom. The only part that has to move out of the way is the second harness of pattern shafts. However, it is possible to move the shafts to the side of the loom. They are only in the way of the new warp when weaving the full width of the loom or where the number of pattern shafts in the loom is considerably increased.

The loom extension can be left on the loom and or its setting shortened.

What equipment is necessary for a single unit Draw Loom?

In addition to the Glimakra Standard Countermarch Floor Loom you will need the Myrehed Draw Loom Bridge and Loom Extension plus a Start Pack. 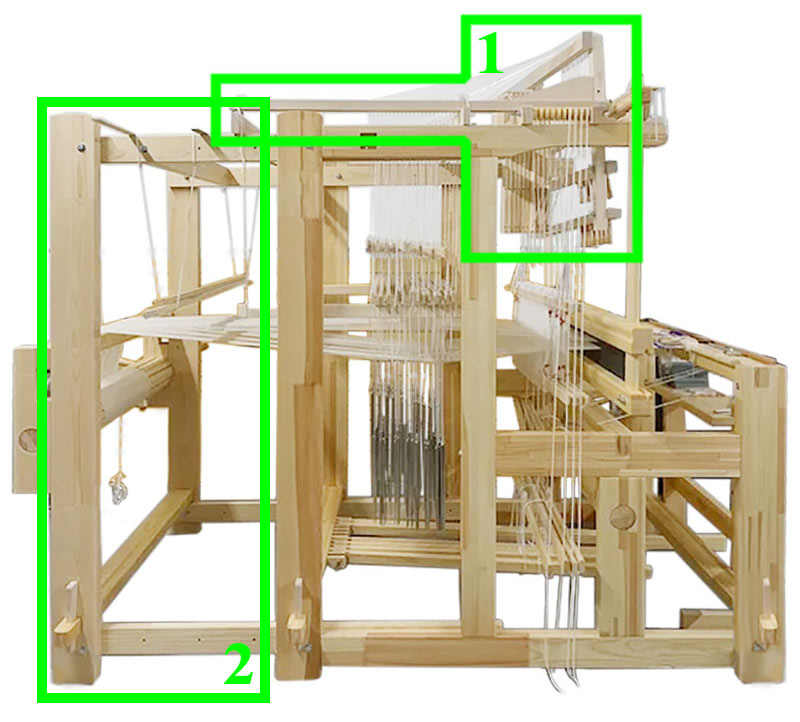 The Draw Loom Bridge (1) and Loom Extension (2) do not depend on the loom width.  They are added to a Glimakra Standard Countermarch floor loom with a minimum of 6 shafts and a maximum of 10 shafts.  For a loom with more shafts it is strongly advised that the additional shafts are removed.  Other floor loom maker options are available, please contact us for details.

Box 1 is a view from the front of the loom showing the bridge section with the draw handles, box 2 shows the first harness of shafts for weaving the fabric and box 3 shows the second harness of draw harnesses; all attached to the Glimakra Standard Countermarch Floor Loom.

Start Packs are available for the 4 widths of Glimakra Standard Countermarch floor looms (100cm, 120cm, 150cm or 160cm) and include the following:

Can the Draw Loom capability be expanded?

Adding more draw loom shafts will give you more pattern possibilities. Lillemor Johansson’s book Damask and Opphamta has patterns which show you what you can do with 10, 20 shafts and more. Whichever you choose, you can add to it. You can start with 10 shafts and draw cords, there are many patterns that you will find. You can later add shafts 10 at a time, up to 50. If you think you will someday want more than 50, order the larger bridge that can have up to 100 shafts on the widest looms.

What is the delivery time for a Draw Loom?

We can provide an expected delivery time for the Myrehed Draw loom when you place your order. In the event that we don’t have your loom size draw loom in stock, we will let you know how long it will take to get that size. Delivery in the UK is through George Weil who take care of all the border customs documentation and payments and then forward the draw loom to the customer. All costs, including free UK delivery, are in the price shown on the George Weil web site.