Tapestry weaving is a relatively simple method of creating fabric for rugs, cushion covers and decorative wall hangings. The technique will appeal to the artist as the yarns can be used to ‘paint’ a picture across the supporting warp. Offered here are a range of tapestry looms and frames from Glimakra, Schacht and Ashford, plus you can also order from a selection of yarns to create your tapestry.

A warp (which is the yarn on which the tapestry will be built) is wound onto a frame vertically and positioned evenly across the frame with a warp yarn woven horizontally at the bottom of the frame to bring the vertical warps into alignment (the footer) and again at the top of the frame (the header). The yarn which will be woven under and over the warp is called the weft. As the weft is woven, it is pushed down so that there are no gaps between each row of weaving and the warps threads are eventually covered. This is known as a weft-faced weave. You can find out more about getting started with tapestry weaving from our Blog post.

Beat: To push down the weft, usually with a beater or the point of a bobbin, so that there are no gaps between rows of weaving.
Beater, Fork or Comb: A heavy tool with evenly spaced teeth used to fit between the warp and force down the woven weft yarn.
Block: A method of flattening and shaping the completed tapestry. The weaving is fixed to a flat surface and gently steamed.
Bobbin: A pointed tool on which the weft is wound and passed between the sheds of the warp. A complex tapestry may have a large number of bobbins hanging from the warp.
Cartoon: A full size sketch of the design used as a template for the weaver. Sometimes the main elements of the design are sketched onto the warp threads as an additional guide.
Interlocks: Methods for dealing with slits where two colours meet, including wrapping wefts around each other or alternating wefts from adjoining shapes around a single warp.
Loom or Frame: A strong framework made to hold the warp in position.
Plain weave or Tabby weave: A weave in which the weft passes over and then under consecutive warps.
Selvedge: The outside edge where the weft yarn is taken around the last warp thread. 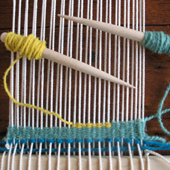 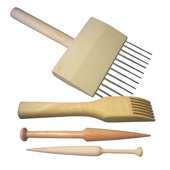